Donald Duck, Taxes and You

As I grumbled my way through my taxes this afternoon, I kept thinking of a little gem of a Disney video I stumbled over recently.

The government needed to raise money – lots of money – to keep fighting World War II. Though the federal income tax had been introduced via the 16th Amendment in 1913, the Revenue Act of 1942 raised rates, reduced exemptions and added a 5% “Victory Tax” on all incomes over $624 ($7059 in today’s dollars).

To convince citizens of the need to pay their share, the government hired Disney to make this video. After a strong dose of patriotism, Donald Duck walks through the relatively simple income tax form. In 1942, he made $2501 in income, paying $13 in federal taxes (an effective rate of 0.52% – versus about 21% today).

The narrator stresses, “It’s your privilege – not just your duty – your PRIVILEGE, to help your government by paying your tax, and paying it promptly. Taxes for guns, taxes for ships, taxes for democracy… taxes to beat the Axis!”

After the four minute mark, it starts to get really dark. I could dissect it line by line, but it’s really incredible how the government leveraged war and the defense of democracy as a call for taxation. And remember that Disney produced this!

At the same time, I marvel at how far it’s gone. Taxes are too high in general, but I somewhat prefer my local taxes, where I get a quasi-itemized bill showing how much goes to the city versus the schools versus the forest preserve, etc. (Though I quibble with how it’s spent, at least it’s spent locally, where I can see it in action). But the federal taxes I pay every paycheck and reconcile each spring – with huge sums going to the morasses that are Social Security and Medicare – just make me sick.

And the state… well, Illinois is just a lost cause.

It certainly doesn’t feel like a privilege to pay my taxes.

What’s the best part of being a home owner?

Not the pride of ownership I feel every time I turn the key (cheesy, but true).

Not the ample space to spread out.

Not the postage-stamp backyard for sunning and stargazing.

Not the unpredictable snowshoveling or the fear of frozen pipes.

Not the costs of keeping up with repairs and improvements.

Not the frustration wrought by the crack-dealing neighbors or last summer’s drive-by shooting.

Not the joy of turning the corner and seeing my house, lights on, an inviting beacon on a cold, dark night.

No, the best part of homeownership is the tax break. After paying nearly a quarter of my annual income in mortgage interest(!), come March, I get a sizable tax refund. I use it to pay down debt. Sigh.

But today, at least, that tax refund makes it all worthwhile.

I need a new couch 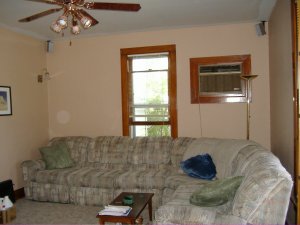 The hours of couchtime I’ve logged in recent weeks have reiterated my need for a new couch. Mine is twenty years old and served hard time in the Anderson household for nearly fifteen of those years. It’s giant and sectional and barely curves its way into my living room, blocking both windows.

But the worst part is the deteriorating structure and cushion. While lying on the couch, the wood beams poke through against my back and hips. In one section, the upholstry holding the frame together has disintegrated such that if you sit directly on it, you sink.

Alas. I’ll add it to the “when I have money” list…

But part of my decision to buy my house meant a very conscious and strict budget. And kicking out the slacker boyfriend shortly after moving in meant that money got even tighter. By my calculations, I have a disposable income of about $11 a month.

I’ve never paid for cable – my most recent apartment was possibly the last surviving incidence of native RCN in the city of Chicago – and am somewhat proud of that silly distinction. Sure, I could argue that I have better things to do than watch TV. That’s especially true in the summer, when I spend hours on my bike or puttering in the yard, but this time of year, mindless, easy TV calls me. And sometimes, I miss HGTV or the Colbert Report or the plethora of reruns.

And tonight, as the slush plops down and I follow election returns online, man, I wish I had cable.