Over years of cultivating my tool collection, I’ve built a pretty respectable, useful toolbox. Inevitably, some projects require additional pieces that I add from time to time. Some are cheap enough to pick up as I need. Others, I borrow from Dad – though he has banned me from re-borrowing his sander, saying it’s useful and inexpensive enough that I should get my own.

But somehow, a few of the basics have slipped through the cracks. Hence, my (moot) rubber mallet purchase for the towel bar project added some nice heft to the toolbox.

Sunday, I rectified one of my long-standing (back to apartment days!) gaps. At Wal-Mart, looking for Liquid Nails, I passed through the small tool aisle and stopped dead in my tracks. I 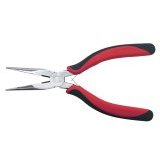 think I may have even uttered an, “Oh!” to the confusion of passers-by. Right in front of me, were the holy grail of my tool box: needle nose pliers. Surviving without them has required some ingenuity, usually involving tweezers or fingernails or trying to corrupt the regular pliers. Not having them has never delayed a project or necessitated an emergency run to Ace. I’ve made do. But now, $1.87 later, my toolbox is one toy closer to completion. I can’t wait to actually use them.

This entry was posted in House projects and tagged Tools. Bookmark the permalink.