Growth, at a Cost 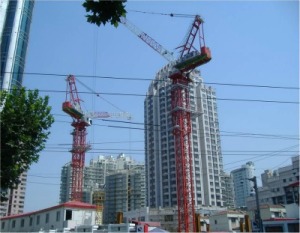 While traveling through Asia, I marveled at the sheer amount of growth. I hadn’t really realized it, but in the US, the last couple of years haven’t seen much construction. Store fronts empty and aren’t replaced for months on end. There’s a lot of reusing existing resources rather than building from scratch. Heck, even Habitat for Humanity is rehabbing rather than building.

In all three cities we visited – Seoul, Shanghai and Taipei – the opposite was true. Rampant growth pervaded every city, with entire blocks being recast to serve the new economy. In Seoul, there were simply no vacant store fronts – occupancy had to be nearly 100%, with new buildings growing taller and taller around the mountain-ringed city.

In Shanghai, growth was most obvious. The city has been on a decade-long growth spurt, in part to prepare for last year’s Expo, in part driven by a voracious economy (and yet, the growth fuels the economy itself in a vicious whirligig).

On the surface, growth is groovy. It adds a veneer of flash and new sophistication to Shanghai, helping the city meet its boasts about joining – and leading – the world economy. 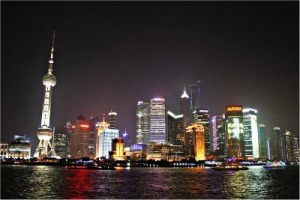 Meet George Jetson... Shanghai's Pudong section, all of which is brand new

But that veneer is easily scratched, and what’s below isn’t so pretty and shiny.

China’s growth is driven entirely by the government. The central state sets aggressive GDP targets, and since it controls the means of production, it will do anything it needs to do to meet those targets. Including building where the market doesn’t demand it.

In central Shanghai, it’s not as obvious, as the city teems with more than 23 million people. But in the outskirts – and out in the provinces – thousands of sparkling new buildings sit empty in China’s increasingly famous “ghost cities.” China has vowed to build 20 new cities a year for the next 20 years, many of which now sit completely empty. The Google Earth images are eerie: perfectly developed cities with schools, hospitals, malls, and housing developments – but no cars or people.

The Pudong section of Shanghai was boggy marshland a mere decade ago, and now it looks like something out of the Jetsons. New subway lines are opening nearly yearly, some stretching out to the middle of nowhere. Construction sites bustle with activity every day of the week, importing thousands of migrants every summer who live in small shacks on the building sites.

But what’s the cost of such uncontrolled, yet centrally planned, growth? It’s certainly not sustainable, and many fear a bubble is bordering on bursting.This growth displaces thousands, even millions, of families from their homes, all in the name of progress. The Three Gorges Dam project alone destroyed 1200 villages and displaced 1.3 million people. In Shanghai, some scoff that demolishing acres of traditional homes – and replacing them with highrises few Chinese can afford – is merely finishing what the Cultural Revolution started.

And when the rush to build meets rampant corruption and bribery, corners are cut. Some call the results “blood-stained GDP.”

We saw growth in all three cities, but in Shanghai, it felt the most feverish and, in a way, desperate. Desperate to prove to the world that China has arrived, eager to overcome the chip on the Chinese shoulder.

Growth is marvelous when there’s market demand for it. Construction companies stay busy and give businesses room to expand and hire additional employees to make more things that serve more people. But when the market demand wanes and you keep building, the bubble will eventually burst.

This entry was posted in Travel and tagged Asia. Bookmark the permalink.

3 responses to “Growth, at a Cost”