If you follow me on Twitter, you’ve likely seen me whining about Stats class the last five months. (Never fear, that’s ending in another few weeks!) But in reality, it’s been very interesting and has opened my eyes to a new way of thinking. (More on that in a later post.)

Since I became serious about my health two years ago, I have tracked everything to do with my workouts. I have spreadsheets for my strength training that list every weight used with respective reps and sets. I print off blank calendar pages every month so I can have an easy visual for when I work out – so if I notice too many blank days in a week or month I can push myself back into action.

And on DailyMile, I’ve found a whole community of like-minded numbers nerds, tracking every tenth of a mile. 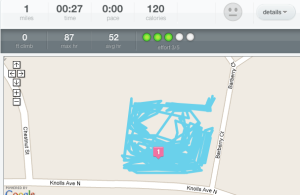 In fact, my DailyMile friend Mike recently posted this map of his most recent “run.” You see, Mike had finished his long run for the weekend and realized he was a mile shy of 60 for the week. Being so close to a milestone like that is enough to drive you crazy. So, at his wife’s suggestion, he strapped on his Garmin while mowing the lawn to get one more mile in, albeit at not nearly the same intensity of a run. (Though he did note his back yard pace was slower, as he had to pick up the kids’ toys.)

I do that, too. Before I run, I usually map out an approximate route so I know about how far I have to go to get in a five mile vs a nine mile run. But inevitably, variations occur, often to avoid traffic or red lights. (On hot sunny days, I’ll reroute to find shade.) If I get back to my house and I’m at .8 or .9 of a mile, I usually try to “top off” my mileage by taking a quick spin around the block, which is about a quarter mile.

Numbers are good because they keep us honest. I think that’s why I like DailyMile so much: it blends the hard data (“I ran x miles in y minutes for an average pace of z.”) with the more subjective (“My bikram instructor sounded like she was running an auction. Or perhaps hog calling.) Both pieces work together to motivate us, and to reward us when we hit the random thresholds we deem so important.

Of course, there is the downside: when you let a numeric goal get to you. But more on that in another post.

Do you find numbers motivational? Or do they play tricks with your head?

This entry was posted in Fitness and tagged Goals, Running. Bookmark the permalink.