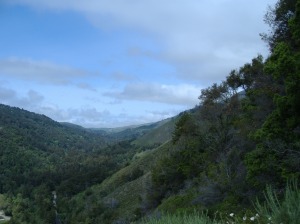 “Climb the mountains and get their good tidings. Nature’s peace will flow into you as sunshine flows into the trees. The winds will blow their own freshness into you and the storms their energy, while cares will drop off like autumn leaves.” – John Muir

These words caught my eye as I flipped through the map and information packet for Pfeiffer Big Sur State Park last week. I’d been in San Jose for a work event. When I booked everything just a week prior, it had been snowing in Chicago – again – so I’d tacked on a couple of extra days to go exploring and exhale after a rough few weeks.

After posing the question on Facebook about the best way to “get some nature” while in the area, a friend had replied, ” Do you want mountains and trees or coast?” I love that California offers an “all of the above” option and picked Pacific Grove on Monterey Bay as my home base.

I found a charming, tiny hotel just a long block from the beach and the historic Point Pinos Lighthouse (the oldest continuously functioning lighthouse on the West Coast). 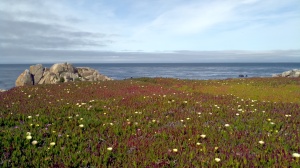 The weather was perfect – hoodie weather, in the upper 50s/low 60s. Warm enough to sleep with the windows open, listening to the roar of the ocean and wakening to the screech of seagulls.

My hotel was 2.5 miles west of Cannery Row, so I decided to walk the beach to get there, stopping to marvel at the shore, the rocks, the pink and pervasive iceplant. At one point, a small crowd was peering through binoculars into a fenced off section at 20-25 seals, with their pups. “Just born last week,” a volunteer said with a touch of maternal pride, showing me where to look to see a baby riding its mother’s back in the surf. 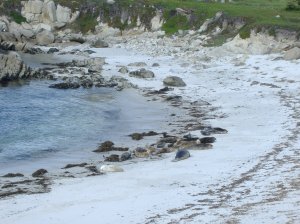 I ate fish tacos and drank local beer, people watching and decompressing. I wrote a lot. I read even more. And Friday morning, after a foggy walk along the beach and lighthouse, I headed down California 1 to Big Sur.

I’d always assumed Big Sur was a singular place, not realizing it’s a chain of 9 state parks stretching along 90 miles of coastline. So I picked John Pfeiffer State Park as my focus. The hour drive south was fascinating, as the scenery quickly changed from seaside plain to rolling, cow-populated verdant hills to fog-shrouded rocky cliffs – and back again. I watched my car’s temperature gauge fluctuate – and felt my ears pop – as I wound up and down. At one point, the road was closed to a single lane for construction, and I waited patiently at the very top of a mountain, thoroughly enmeshed in a gray cloud, as vultures circled just a few feet away. I chatted with the construction worker holding a STOP sign. He said he had never realized how large the scavengers are until he started working on the mountain. They easily had a wingspan of 6+ feet. As I drove throughout the area, you could often see them circling overhead, gliding effortlessly as they scan for dinner.

At Pfeiffer, I spent several hours wandering steeper trails than my norm, but they were very doable in sneakers. Trails were well-marked, but quiet. While I passed other hikers every few minutes, I was mostly alone with my thoughts and woodpeckers, rustling squirrels and the gobble of wild turkeys. After awhile, I slowed my pace, inhaling the aroma of fresh leaves and moss and the salty moistness that comes with ocean proximity. I passed several varieties of unfamiliar wildflowers, each with their own heady scent and splash of color against the green. And I tried to wrap my arms around redwoods, tourist-style, stunned at their sheer size and scale. From the forest floor, you couldn’t see the tree tops. It was only after hiking up and around for several minutes that you cleared the trees and were thrust into brilliant sunlight and marvelous vistas.

When I returned to the car, hungry but thoroughly satiated, I drove a few miles south to the recommended Nepenthe for lunch. I had a front-row view of the mountains and coast, and time stood still as I lazily sipped a beer and devoured a burger and salad. I didn’t want to leave, and lingered on the patio a while, breathing the sea air and taking photos.

But I headed north again, experiencing a completely different drive now that the fog had lifted and the sun was out. I stopped in Carmel to see the Mission, tiptoeing around a wedding party to snap a few pictures. Then I drove back across the peninsula to Monterey and the wharf, with barking sea lions and overpriced fudge. A bit down the beach, a small crowd watched a sick sea lion sprawled on the rocks. The Marine Mammal Center had dispatched a team that assessed and rescued the sea lion, taking her to their veterinary hospital for diagnosis and treatment.

Too quickly, the day came to a close, and I headed to the beach by my hotel, the western-most point on the peninsula, and settled onto the rocks to watch the sun drop into the Pacific. The waves crashed against the rocks as day yielded to night, with a very brief pink interlude.

Saturday morning, I rose to the squawking of seagulls and jetlag. I pulled a hoodie over my pajamas, slipped on my shoes, and walked back to the beach. Overnight, the waves had grown taller and more intense, and I sat on the rocks and wrote a while, pausing to scan the horizon. Eventually I closed my notebook and returned to reality, grabbing a scone on my way.

Two days solo was perfect. I was reluctant to leave the waves and the fresh air, and I could have easily spent a couple more days exploring. But it was time to go home. Plus, I know that spring will bring greenery to Elgin soon enough. Even if snow is forecast for Friday.

This entry was posted in Travel, wildlife. Bookmark the permalink.